When cooking your turkey this Christmas don't forget, that when calculating the cooking time, to allow for the weight of the stuffing.

Make sure that the juices run clear from the thickest part of the bird, ie the leg area, before serving.
Posted by Ken Frost at 2:16 AM No comments: 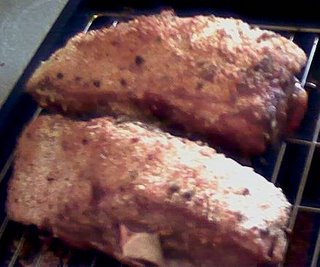 Here is an easy recipe for a gorgeous and succulent Christmas ham.

Select a good quality smoked gammon joint, plenty of fat and not skinned, not less than 2kg.

-Bring to the boil in fresh water

-Simmer for 20 minutes per pound

-Skin (put the skin in the stock, and use for making split pea soup)

-Stud the fat with cloves

-Smear the fat with a paste of brown sugar, egg yolks and English mustard

-Cover this with breadcrumbs

-Put in a pre heated oven (180 degrees) for 20 minutes, or until golden brown

Absolutely delicious!
Posted by Ken Frost at 4:22 AM No comments:

Those of you who will tuck into smoked salmon this Christmas, thinking that you are eating at least one thing that is good for you may need to think again.

Channel 4 last night tested farmed smoked salmon, purchased from Britain's leading supermarkets, and came to the rather alarming conclusion that many of the leading products contained approximately 20% fat. This compares with the 6% fat content of wild smoked salmon.

Therefore for evey 100g of supermarket smoked salmon that you eat, you are eating 20g of fat. The recommended daily allowance of fat is around 90g.

Maybe it is better to stick to the mince pies!
Posted by Ken Frost at 2:18 AM No comments:

We have all felt, at one time or another, that we have paid too much for a pint and that the breweries were "having a laugh" at the drinker's expense.

However, the prices that we pay in pubs for even the most "designer and trendy" of beers pale into insignificance when compared to the beer that costs you £32 per pint.

Deus, brewed in the Belgian village of Buggenhout, will set you back £32 a bottle in certai restaurants.

Aubergine, a Michelin starred restaurant in Chelsea London, has a beer list which includes pint bottles of Deus for £32.

The Bosteels brewery that brews Deus, which comes in at 11.5%, claims that they treat it like champagne.

The fact that restaurants are able to get away with charging ridiculous prices like this show that, regrettably, some customers have more money than sense.
Posted by Ken Frost at 2:12 AM No comments:

Gordon Ramsay is reportedly considering floating his restaurant empire on the London Stock Exchange, in order to obtain funding to market Maze internationally.

Maze is a tapas style restaurant in Mayfair, London, which Ramsay wants to turn into an international chain.

Ramsay is quoted as saying:

"We'd be very stupid not to think about it. The level of interest we got on the back of publishing our accounts last year was phenomenal, so of course I'm interested in the idea of floating."

Gordon Ramsay Holdings consists of eight restaurants in London, and earned profits in 2004 of approximately £4M.

Ramsay made it clear that he won't give up control of his group, in order to ensure that standards are maintained.
Posted by Ken Frost at 3:04 AM No comments:

To Serve Is An Honour

To Serve Is An Honour

It seems, that despite the fact that London's restaurants are now recognised as producing the world's finest food, they still can't get past that old "British disease" that waiters are doing the customers a favour by serving them.

That at least is the conclusion of the annual Square Meal restaurant guide survey.

Some of London's most famous restaurants, such as Cipriani, The Wolseley and Yauatcha, have been rubbished by their customers for the arrogant, surly and slow service.

One contributor is quoted as saying:

8,000 people replied to the guide's poll, 45% complained about shoddy service for the third year running.

Gaby Huddart, the guide's editor, is quoted as saying:

"Our restaurants are absolutely fabulous, but one aspect lets them down. If you go to Paris, it is a very rare day that you don't get very good service in an A-class restaurant.

Similarly, a New Yorker would be gobsmacked if you weren't served with a smile."

Cipriani, which I featured in a positive manner on this site less than a fortnight ago, was criticised; one person described his visit as a "horrible experience".

The Wolseley was "snobby and unfriendly", "Just the most unhelpful and incredibly arrogant and rude receptionists that can be found."

It is time that staff and managers of these places realised that people are there as much for the experience, as for the food. A smile and a cheerful "can do" manner really does go a long way to making the meal memorable.
Posted by Ken Frost at 2:51 AM No comments:

The Value of Chip Fat

The Value of Chip Fat

In one rather unexpected outcome of the recent Tory leadership battle, chip shops and restaurants have been told by David Cameron to collect their old cooking fat so that it can be used to fuel cars.

The chip fat proposal is being promoted by John Gummer, he of the "safe burger" claim in the 1980's, whom Mr Cameron has appointed one of the chairmen of the group overhauling the party's environmental policies.

Gummer claims that more than 75% of the 300,000 tons of waste fat produced by restaurants in Britain each year "goes down the drain, where it has a terrible effect on sewers".

However, the fat can easily be turned into an eco-friendly substitute for diesel. Gummer goes on to claim that it is even greener than other biofuels, since it causes the emission of much less carbon dioxide.

You learn something new every day!
Posted by Ken Frost at 2:36 AM No comments:

Cobra Beer, beloved of many a curry aficionado, plans to start production in India to gain a foothold in an increasing market.

The firm was founded by Karan Bilimoria in 1989, and the beer is sold in most major UK supermarket chains and 6,000 restaurants throughout Britain.

Cobra says it is in talks about setting up a brewery and distribution centre in Hyderabad.

Cobra has fewer bubbles than many other lagers, so that it is easier to drink while eating.

Cobra now has an annual turnover of £80BN, and is exported to over 35 countries worldwide.

It also tastes good!
Posted by Ken Frost at 2:09 AM No comments:

My compliments to Cipriani (25 Davies Street, London) for providing myself and two friends with a table for us to have a few drinks at this Saturday, despite the fact that we had just walked in off the street on a very busy night.

The service was professional and courteous; the champagne cocktails, that we indulged in, provided a splendid start to our evening.

I look forward to dining in Cipriani's one evening, and trying the food which looked delicious.
Posted by Ken Frost at 2:51 AM No comments:

The Dangers of Salads

The Dangers of Salads

Those of you who think that you are being virtuous by having a salad in a fast food establishment, may have to think again.

Tests by Which? of items bought at McDonald's and Kentucky Fried Chicken, have revealed that three salads were the saltiest options on the menus.

Each contained over 3g of salt per salad portion, this is over half the recommended maximum daily intake of 6g.

Which? also noted that the websites of Burger King and KFC were inaccurate, in respect of their food's nutrition content.

The report noted that there was in fact 19g of saturated fat in a Burger King Whopper and regular fries, which was 6g more than the 13g stated on the company website.

A KFC Zinger Crunch salad had 6.7g of saturated fat, almost treble the 2.4g stated by KFC. The company told Which? that discrepancies could be due to "over portioning" at some stores.

"Don't assume that a salad is always a healthy option - you could be getting a large helping of fat and salt on the side. Although fast food companies now offer more choice, it's hard to know what you're really getting."

Burger King said in a statement that the company website gave "typical" nutrition figures, intended as a guide for customers.

Fluctuations in ingredients used by staff could lead to some variations, it said.

The lesson here is, that if you are in fast food place, stick to the fries, burgers and chicken; at least you will feel full.
Posted by Ken Frost at 2:34 AM No comments: